Is It A Ghost? 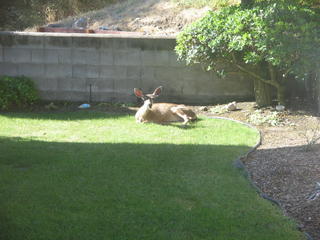 If you live in suburbia, like where I grew up, in the greater L.A. Metroplex, you probably don't see a pregnant deer lying in repose in your backyard every day.

I remember growing up in a small town in Orange county, just 100 feet from the L.A. county line, which gave us bragging rights; we were NOT in L.A! We actually had an Amusement park, called "Japanese Village", where they had a petting zoo, called the 'Deer Park', so that all the kids that had grown up and never seen a deer could go and 'hang out' with 'em.

Most of my friends could care less about the deer, and always made a bee-line straight for the arcade. The arcade had Pachinko machines, which are gambling devices in Japan, but kids could play them here.

Personally, I liked the deer park. I liked the peace of it. The grounds were ornate, as you might imagine being a Japanese deer park. There were pagodas, and ponds full of koi, and zen sand gardens - the real ones, not those little desk toys you buy at the bed / bath / housewares big-box store. They had food dispensers, so you could feed the deer if you wanted, er, if they wanted.

Turns out, all the times I went there, the deer were on the opposite end of their vast, ormately decorated, well manicured fields, far away from the viewing areas, and not interested in eating. They looked terrified most of the time, as I recall. I never did get to feed one...I bought lots of deer food from the dispensers...but never did get one to eat from my hand.

And it was that memory of deer that formed my assumptions about their behavior.

Then I moved out of the greater L.A. Metroplex, where I had clearly spent too much time, to a place that has more of a rural atmosphere. A better way to say it might be that because the area hasn't been so overdeveloped, kids actually know what a deer is, they see one in their back yard every once in awhile. In my case, we rarely don't have a deer back there.

My gardener hates them. He says they tear up the grass, pee on it and kill it, they'll eat everything green and growing with few exceptions, and sometimes torment the neighborhood dogs and cats. I can't quarrel with any of that. Seen it. My grapevines are a special treat. And you can see my lawn's dismal shape in the photo.

Fact is, up here, away from Suburbia and parks with pagodas and ponds full of koi, deer are a pest. So are gophers, squirrels, skunks, opossums, foxes, coyotes, bats, and wild pigs. I've moved to Wild Kingdom. I've seen every one of these critters close-up...in the skunk's case too close-up...from the comfort of my own home. My neighbors don't think of these animals as being part of the atmosphere that makes this area of the world so serene and beautiful; they're just nuisances tearing up their professionally-manicured landscaping. Or eating the dog.

Opossums are strange. They're called 'speed bumps' due to their proclivity to wander onto the street and freeze, fall over sideways and 'play dead' just as your car rushes toward them. I wonder; Is that 'playing possum' or 'playing chicken'? No, wait - its playing dead. Too bad for the opossum.

Personally for me, I like the fact that the animals feel comfortable enough with humans to just hang out in the neighborhood. I'm a bit of an environmentalist at heart, I suppose. I like commuting with nature, but not commuting over it, as I did a little over a week ago (see my 'morning after' blog entry). I'll do my part, to my neighbors' dismay, motivated possibly by guilt, to see that these critters have a safe place to spend a Sunday morning.

I've built a bat house, but of course the bats prefer to hang upside-down over the front door and guano on everything. I've researched, read lots of plant guides, and found plants that the deer don't like, but won't kill them if they're eaten. You know, people that wrote plant guides probably visited the deer park for information like I did, because they have no clue of what a deer eats and doesn't. None of my 'deer-safe' plants remain.

Do you think this deer in my back yard knows about my past? My incident with the deer on the freeway? I'd offer my condolences, but somehow I don't think she's interested. My grapevines are much too enticing.

The Japanese Village and deer park went broke many years ago, while I was still in high school. Its beautiful grounds were sold off piecemeal to developers, its office equipment and such were auctioned off, and I think it was leveled for a factory of some sort. I often wondered what happened to all the deer that lived at the deer park. Surely they weren't auctioned. Maybe they were relocated around here somewhere.

I know what happened to the pachinko machines...I'll have to get mine out of the attic one of these days...
Posted by Dennis at 9:03 AM