Use #14: Digging Pavement Out Of Kneecaps 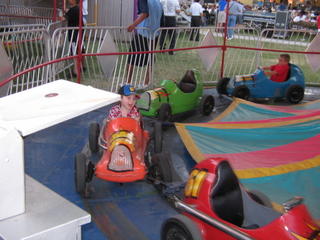 Ouch! Is there more to say?

Monday was "Kids Day At The Fair". That's right. We live in a small town, near a big rock, and we still have small-town county fairs in the summer. Where else can you have pig sweat, corn dogs, funnel cakes, tractor pulls and Raven Simone on-stage all in one place?

If you're a parent, you should know who the hell Raven Simone is. She's Disney property and a kid on a kid's show on Disney Channel (check your local listings for time and channel).

And if you're a parent, you should know by now that you should be equipped for ANY emergency at any time and in any place...even at the fairgrounds...especially when your kid takes a spill serious enough to bring the paramedics running at ramming speed.

My son tripped, and skinned up his knees just a bit on the uneven asphalt hastily laid down just days before our beloved county fair opened. The fiargrounds are often ripped apart before the event, and afterwards for other uses, so uneven pavement is old news...except for a 5-year-old who is looking everywhere but at his feet.

There's just TOO MUCH to see, too many sights and sounds -- and smells -- at the fair to be looking at the ground. It was inevitable, and frankly, anticipated. My wife and I knew as soon as he saw the giant stuffed animals at the midway, and the car ride pictured here, he'd be too involved in the moment to be mindful of which foot went first.

At 5 years old, that's still an area of mental focus.

The paramedics came within seconds of being summoned by the fair security staff, who witnessed the impact. The security staff were obviously bored and desperately wanting of something important to do that required the use of those cool 2-way radios (with earpieces) that they'd been issued. They got T-shirts, too.

The paramedics were in amazing physical shape. Between the two of them they were carrying a tackle-box complete with defibrilator and portable pharmacy, a back board, and an oxygen tank, all the while sprinting across the fairgrounds during our usual 102-degree summer heatwave. I would have given them a standing ovation, or at least held up score cards reminiscent of Olympic events past, "10.0", but the timing didn't feel exactly right. My boy was hurt after all.

Besides, once the barely-huffing paramedics surmised what had happened, they were a tad miffed at the security staff with the T-shirts and the cool radios, who had clearly over-reached their authority. They cracked open their tackle box and set to work, cleaning up the skinned knee that dad had already tended with -- you guessed it. When one of the 'medics reached into the tackle box and pulled out gauze tape and scissors, I realized that the paramedics, too, were bored and in need of something fullfilling to do. My kid's skinned-up knee would have to do on this hot, sweaty, smelly summer day.

My son was smiling from ear-to-ear with all the attention and the VIP treatment he got just for doing something he does routinely around the house. He got a hug and a fake tatoo from one of the paramedics -- an attractive woman who looked like she could bench press the cotton candy stand. She carried the backboard and oxygen bottle.

The gauze tape and scissors, unused, went back in the tackle box.
Posted by Dennis at 9:38 PM