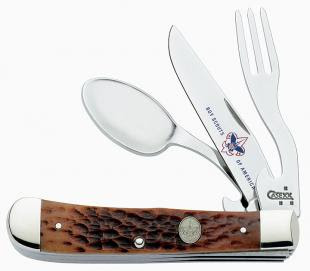 A 6-year-old boy was suspended, sent to 'reform school' for 45 days as if he were some sort of drug dealer or gang-banger.

In point of fact, his sole criminal offense was bringing a Cub Scout utensil set to school, perhaps similar to the one pictured, and he was 'sentenced' under a 'zero-tolerance' policy for weapons possession.

Interesting thing, though: The mutli-utensil kit he's holding in the photo accompanying the NYTimes article doesn't appear on the official scoutstuff website.

I don't have a problem with a kid getting in trouble for having a knife on school grounds, but is a SPORK really a threat? And why have we thrown out all responsibility by adopting 'zero tolerance' policies? Don't we have school administrators to make decisions based on facts, circumstances, and 'priors'?

Chad Love at Field and Stream sums up the situation far better than I;

That's not garden-variety school administration stupidity. Nope, that kind of cosmic dumbassery occupies a temporal plane of ineptitude and lack of reason so profound a Zen master could spend a lifetime meditating upon its philosophical consequences. It's that stupid.

I for one say "You Go, Mom!" These administrators clearly can't be trusted to look out for your son's best interests. Probably best for Zachary if he stays out of that school!

Mom set up a website, helpzachary.com, but it appears to have been crushed, either by the sensational amount of traffic generated by this outrage, or by threat of lawsuit by the school officials embarrassed by this debacle.
Posted by Dennis at 1:51 PM