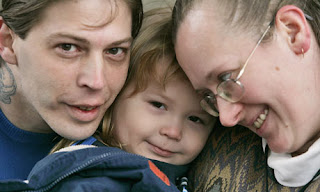 It seems the second jack boot has dropped in the tale of a boy whose parents just wanted to buy a birthday cake with his name on it. (refer to the blog post from Jan 14, 2009 for background).

Little Adolf Hitler Campbell, along with his sisters, JoyceLynn Aryan Nation Campbell and Honszlynn Hinler Jeannie Campbell, will not be returning to their parents by order of the State of New Jersey. The ruling comes over a year after authorities removed the children, at the time citing the names as cause. In fact, the State had to go looking for a reason to keep the kids; the Family Court found no cause to remove them (other than the names, I suspect). But yet the kids stayed in 'protective custody' while the search for a better reason continued.

The State has back-peddled a bit, now denying the names were the reason for revoking parental rights, and disclosing a few more dark details;
1) Unemployed parents who were abused,
2) 'Untreated' psychological problems (both mom and dad),
3) A father who can't read or write,
4) A mother who quit school in the 10th grade,
5) Adolf's vocabulary - at age 4 he can make sailors blush,
6) Accusations of abuse by the dad, Heath, who according to this ABC piece has been married twice before, with one ex-spouse moving away for her own protection.

The Campbells also have some interesting home decorating ideas, choosing swords and skulls over lace doilies and cut flowers.

I think the State was justified to remove these kids from their parents in light of the new details. As dire as the state has made this all out to be, its just amazing that the Campbells managed to survive day-to-day. But to me, if the state is going to use employment status, level of education and/or mental health issues as justification for removing kids from their parents, there may be no home in New Jersey left unchallenged, including the foster homes where these kids will wind up.
Posted by Dennis at 8:51 PM