An Afternoon Under The Big Top 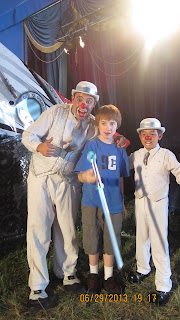 It truly is a magical thing to see a century-old tradition of a real traveling circus kept alive by this troupe of entertainers - some 6th and 7th generation circus performers - who are all working together, some performing in the ring, some performing outside it working the rigging or making scene changes, but all focused on delivering a show to be enjoyed by everyone, without CGI or bad language or stuff so obnoxious you have to cover your kids eyes.

My wife and I attended last year when the big tent came to town, and this year attended again, bringing our son to his first circus.  The material was fresh, the tent was warm but not uncomfortable considering we're in the midst of a horrible heat wave, and the slushees were huge and turned everything they touched a bright clown-nose red.  Popcorn was flowing and flying, caught by the giant fans under the blue canopy, a perfect ambiance for what was to follow.  No spoilers - just some serious thrills and chills, belly laughs and beautiful choreography.

The performers are all warm-hearted and real people, and it was a kick when we realized the guy who sold us a toy outside the ring was their star trapeze man, pulling off a triple somersault.

The performers took the time and made themselves available after the show to sign autographs, pose for photos and talk about the show, and they did 3 shows that day!  Honestly I cannot think of a better way to spend an afternoon than under the big top with my family and this traveling band of gifted and giving performers.  I think we'll go again tonight!

I love the circus. I grew up traveling around the country, visiting various circuses with my Grandparents and I had the honor of meeting many circus families. They are very warm, kind, loving people that are usually very loving strong families that do everything together. The great tradition of families is alive and well within the tradition of the circus. They sometimes get a bad wrap for having trained animals and such, but all the 100's of animal trainers and owners that I met and witnessed would live and die for their animals. Their animals often eating better and being better cared for than themselves. There's always an exception to every rule, but that's true in all types of society. And the entire bunch should not be punished for the sins of the minority. My hope is that we as families continue to support this amazing legacy that should be able to share their amazing talents and love with generations of the future. They are a true gift to society and need our continued business to survive or this art could be lost forever.

That would be a shame. These people do not do it for the money. They do it for the love of the art and to bring smiles to the faces of our world. So thank you for sharing this review.