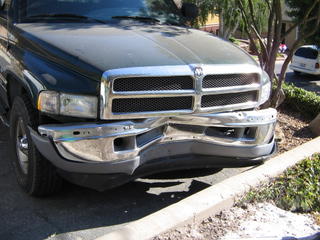 If you read my previous entry, you'll note that I mentioned hitting an unfortunate deer at a high rate of speed. It was late at night, and the full demonstration of physics was not obvious until the light of day. I mean, who knew that a stationary deer could damage a big, heavy pickup truck to the extent pictured here? "You were very lucky", I've been told. Funny, but I really don't feel "lucky".

The deer was large, but was crouched, preparing to jump again, and was struck while in a low prone position. Most of him went under the car instead of over it. Had he gone over the hood and into the windshield, this story would've been VERY different. That's the "lucky" part.

I still have the memory of deer parts flying, and using up all the washer fluid to regain visibility after the imapct.

We have a rental car for now. Rental agencies don't seem to take things like car booster seats into consideration when you tell the agent over the phone, "I have a child car seat. We'll need a car that we can install one into." When we arrived, the agent looked young enough to still need a booster seat to drive himself. Three cars, and three failed attempts to mount the child car seat, and we were stuck with the last thing with wheels on the lot; a red subcompact that smells like a fraternity house after rush week.

The insurance company is already playing hard-ball, insisting that a claims adjuster from about 120 miles away travel here and inspect the car, which won't happen for a few days now. We've turned the car over to the auto body repair center, so there can't be any doubt that this damage was done when and where we say it was. The Highway Patrol report won't be available to corroborate our account of the collision for two weeks. Words like "total loss" have already been used in conversation with the claims representative, even though the car is still driveable (not safely, but there's no frame damage and the radiator is intact). I can only figure that they're going to 'total' it and try to pay as little as possible, rather than pay to repair it. Stay Tuned.

Alas, there is nothing left of the deer, except a rather nasty stain in the roadway...and a memory of a flash in time lasting less than a second...and some regret. But I'm "lucky".
Posted by Dennis at 6:48 PM